Julie talks to Paragraph Planet about her novel 'Dear Thing'

It's the story of Ben and Claire, who have been trying to have a baby for a very long time. Claire is about to give up, when Ben's friend Romily offers to be a surrogate for them. But being pregnant with Ben's baby brings up all kinds of emotions that Romily has hidden for far too long.

On a personal level, it's an important book for me because it's a new direction for my writing, towards emotional women's fiction, and with a new publisher. It's also been chosen for the Richard and Judy book club, which has been one of the most amazing experiences of my life.

Not much, actually. Because it was the first novel with a new publisher, I had to do a full synopsis before I wrote it. So I pretty much followed the plan as I wrote. This is extremely unusual for me, as I usually prefer to make it up as I go along! My main change from one draft to the next was to work on Ben's character. He's in rather a tricky situation and wasn't always easy to write. I did put an entirely new scene into the final draft, though. My publisher had sent me the hardback cover, which had a beautiful pair of baby shoes on it, and I wanted to put the baby shoes in the book. It became one of my favourite scenes (even though they removed the shoes for the paperback cover).

Either the rare moments when the words are pouring out of me and I'm discovering things about my characters that I never knew before; or when the first draft is finished, and I'm doing all the revisions and changes and new writing that will pull the whole book together into something that finally makes sense. My least favourite parts are starting a new novel (because of the fear) and finishing a novel (because I miss the characters once they're gone).

How does one novel affect the next? Do you find yourself influenced from one to another?

I try to challenge myself with each new novel, so quite often my idea for my next novel is something I thought it would be quite cool to do with my current novel but couldn't. I do tend to have recurrent themes that come up again and again in my books - mostly to do with identity and the nature of love - and sometimes, characters will turn up again, too. One of the mothers at the school gate in Dear Thing seemed very familiar to me but I couldn't quite work out why, until it occurred to me that she was the heroine of a novel I'd written in 2006, and that the baby she gave birth to at the end of that novel, was now seven years old. It was nice to spend some time with her again and see how she was doing. 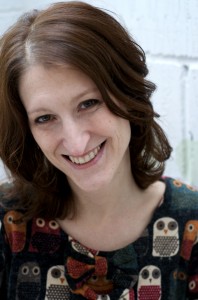 How important is a digital presence for a writer?

It depends on the writer. I think I would go mad without the daily contact with other people that I find on Twitter and Facebook. But then again, without Twitter and Facebook, I would probably get a lot more writing done, too. I've met some fantastic fellow writers, and fellow readers, online. I do think it's important for authors to have ebooks as well as physical books, especially as so many readers are choosing to read on a device these days.

Which authors have influenced your own writing?

Lots and lots of them. As a kid, it was Douglas Adams and Ursula LeGuin and Richard Adams and Judy Blume. Stephen King grew up not far from me, so he was inspiration that you could actually do this thing. As an adult I joined the Romantic Novelists' Association and I met so many writers who have influenced me not only with their books, but through their mentorship and fellowship. Probably the one person who influenced my writing the most was my best friend in high school, Kathy Love, because we used to write together and we learned a lot of craft together, and influenced each other's style, too. She also grew up to be an author in the USA.